The victory of Wellington

On 21 June 1813 one of the most decisive battles in the Peninsular War took place in Vitoria. The allied troops, led by the Duke of Wellington and General Álava, defeated the French troops led by José Bonaparte himself and Marshal Jourdan which led to his definitive expulsion from the Iberian Peninsula. In the turmoil of Europe at that time, the significance of the battle was such that Beethoven himself composed a symphony to commemorate, "the Victory of Wellington". 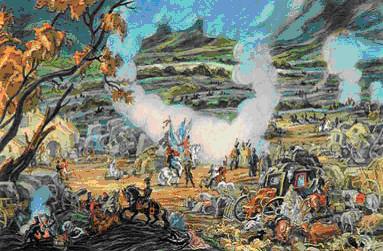 The baggage of King José

This is the title of one of the National Episodes by Pérez Galdos that refers to the enormous haul taken by the French after the Battle of Vitoria. The whole court, headed by José I, fled Madrid taking with them great quantities of jewels, gold and works of art. Thousands of carriages were trapped in the city district as they fled toward Pamplona and were pillaged by the victors. Wellington recovered a many works of art, but Fernando VII gave many of them to him to thank him for his role in the war. Today they can be seen at his residence Apsley House in London.

This battle was not the end of the French occupation of the Peninsula and the return of Fernando VII to the throne, however the triumph of the allies over the almighty armed forces of Napoleon changed the course of European history. Austria, Prussia, Russia and Sweden broke off negotiations with Napoleon and declared war again, defeating him in Leipzig.