The Ataria sundial is an analemma type sundial. It consists of an ellipse drawn on the ground with a series of numbers indicating the hours and a central area where a person, taking the place of the gnomon, must stand on the analemma, on a specific point depending on the date so that the person's shadow will project on the ellipse.

This sundial marks the official time; therefore, it has two time seasons: winter and summer. The necessary adjustments have been made to the equation of time so that the shadow will indicate the Greenwich mean solar time while giving the official time. 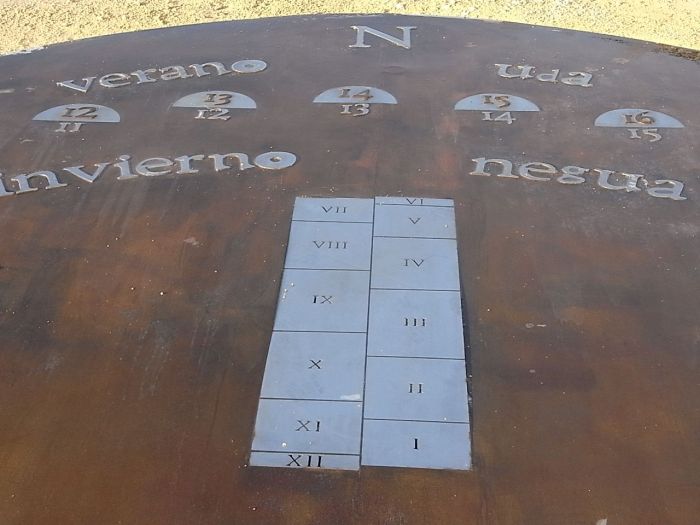 Take into account: Athens and Vitoria-Gasteiz have the same official time. However, the sun sets in Athens approximately one hour earlier than in Vitoria-Gasteiz. To make the solar time that the sundial indicates coincide with the official time, a series of adjustments have been required.

The person whose shadow marks the time must not stand on the tile of the relevant month, but on the edge of the tile, on the central line that separates the two lines of tiles.

For example, in mid-April, you would have to stand on the area marked in green and that same position would be correct at the end of August.

However, if, in mid-April, you stand in the centre of the tile (brown mark, which would seem the logical thing to do), the error would not be too great, as a person's shadow is not a straight line and provides quite a bit of margin.

In addition, this sundial has been adapted to take in the longitude and latitude of Gasteiz and the two time seasons - winter and summer - are displayed so that it will display the official time of Gasteiz. The deviation may be of up to16 minutes, although the discrepancy is usually much less due to a "technical" issue known as the equation of time.

On this type of sundial that difference is not important because the shadow of a person provides a wide margin, far more than the discrepancy.