The village of Armentia was the most important religious centre in Alava in the late Middle Ages and as it was the see of the Bishop, its church was the first cathedral in the Basque Country until the end of the 11th century, a time when the southern part of the Iberian peninsula was dominated by Muslim forces. Later, the bishop's see was moved to Calahorra.

Armentia was a strategic point on the communications networks in Roman and late medieval times and stood on the crossroads of two important routes: the Camino de Santiago (Way of Saint James) towards Gometxa, and the Roman road, which, after passing by the Mariturri Spring, headed towards Zuazo, and from there to Lermanda, Margarita and Iruña.

The Basilica of San Prudencio

Armentia is the home of the Basilica of San Prudencio, a Romanesque building dating from the 12th century, originally dedicated to Saint Andrew, and built on the remains of an 8th century church. It was refurbished in 1776, destroying part of its original structure, although it retained its apse and other isolated elements such as its original door. In 1964, it was restored once again and today is considered one of the most important examples of medieval art. The Basilica has been declared a monument of the Basque Country. 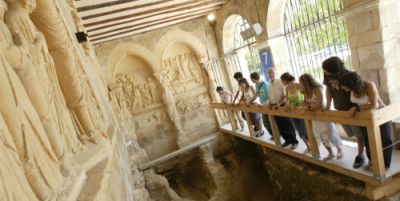 Built with a Latin cross layout, the vaults over the apse and crossing of its two arms are of special interest. The bases of the arches of the second of these vaults contain sculptures of the evangelists. The capitals of the church are decorated with plant and animal motifs, as well as battle scenes between horsemen and centaurs. Its atrium contains the remains of the original doorway. After being dismantled, stones from the doorway were embedded in the walls in a disorderly fashion: the tympanum of the Lamb and that of Christ with the Apostles and the bas-reliefs of the Descent of Christ into Hell and the Sepulchre of Jesus, represent one of the best Romanesque sculptural groups in the Basque Country.

The Basilica contains the image of San Prudencio (Saint Prudence), Bishop of Tarazona and Justice of the Peace in Osma, born in Armentia and Patron Saint of Alava from 1644. On April 28 each year, celebrations are held in his honour in the form of a procession and open-air festival, held on the meadows that surround the church.